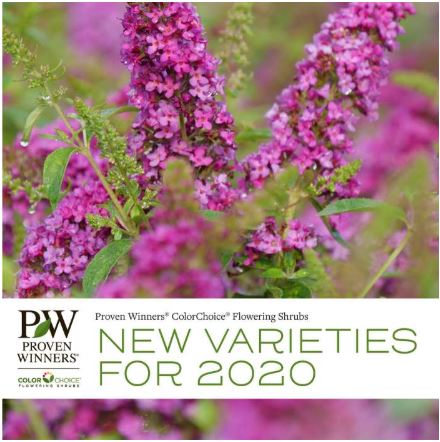 New colors that expand existing series are also a hallmark of this year's Spring Meadow introductions. Sunjoy Neo™ adds bright neon color to the brands barberry series, and the new Perfecto Mundo® series of reblooming, lacebug resistant azalea adds Double Purple to the line. Last season we saw the introduction of the tri-colored Ringo® rose, and a new color has been added to that series as well with Ringo All Star™, which features melon-orange and pink blooms that age to lavender for a multi-colored effect.

Known for their innovative hydrangea breeding, Spring Meadow has introduced five new cultivars for 2021. Adding to their Invincibelle line of pink H. arborescens is Invincibelle Garnetta™, which blooms later than other smooth hydrangeas, extending the season with fresh color. The Proven Winners ColorChoice brand has also added two dwarf bigleaf hydrangeas, aptly named Wee Bit Grumpy™  and Wee Bit Giddy™. The latter is a cross between the Let's Dance Rave® hydrangea and Cityline® Paris hydrangea, bringing the saturated color of the Cityline series and the reblooming ability of the Let's Dance series. The Let's Dance series of hydrangeas has also added two new cultivars. Let's Dance Big Band™ sports extra-large inflorescences and is an excellent rebloomer, with the ability to create new wood flower buds more rapidly than other macs. Let's Dance Cancan™ is technically an H. serrata but looks like a bigleaf hydrangea with its big, full blooms. This new cultivar is an excellent rebloomer, requiring only a short period of vegetative growth in order to create new wood blooms. dding to its reblooming strength is the fact that it sets its flower buds along the entire length of the stem, meaning if it's cut back, or damaged by cold temperatures, those lower old wood buds will still develop into flowers.

The brand has also added a new line of clematis with its Sparky™ series. All three colors in the series offer early-blooming flowers in a unique, pinwheel-like shape and a new line of Hibiscus, with Paraplu Pink Ink™ and Paraplu® Violet.

In addition to the new varieties mentioned here, Public Relations Specialist Natalie Carmolli has created a series of seven short videos to highlight 11 of its new introductions. A brochure with images and descriptions of the complete line of new varieties can be downloaded here.